A Page from Munaku's Book 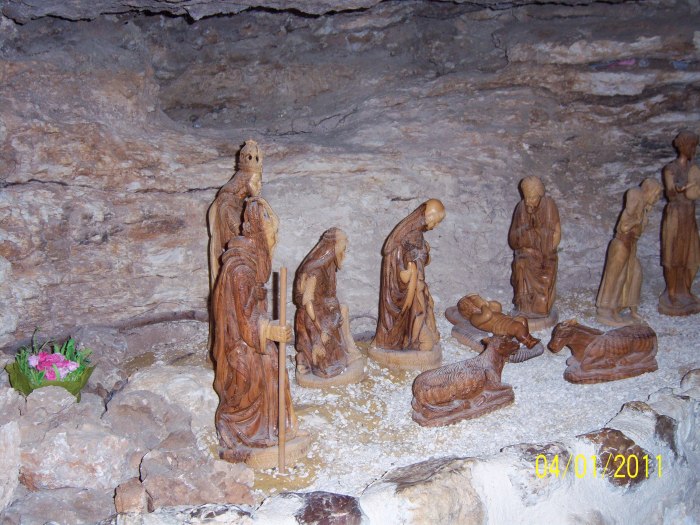 Caption: A sculpture depicting  the shepherds in the manger

Nothing awakens the child in me as the festive season. I only need to hear Silent Night  or  Joy To The World and the small girl in me lights up and is instantly transported back to her childhood. This is one place where I had felt loved, cared for  therefore safe and secure. I trusted my parents and myself enough to learn the basic skills  of life  from them until I grew up to take care of myself. I unashamedly admit that though I attended a church missionary- founded school, the true meaning of Christmas was lost in the festive activities until my late teens. I am sure I was not the only one to trivialize the season  among my peers.

The performance of the Christmas Nativity play at the end of the school year  would get me into the Christmas spirit. At home, the neatly trimmed hedge and manicured garden would  give the tell tale signs of the approaching Christmas. By the second week of December, the early Christmas specials would have been made available in some of the big shops like Drapers and Deacons in Kampala. One of our big cousins would take us to the city for shopping; a new shirt and trouser for the boys while the girls bought dresses and shoes. We would return to the city a number of times just to be part of the crowd of shoppers under the pretext that some of us  had not yet found what we wanted. We were always fascinated by the decorated Christmas trees in these big shops.

Later as we grew older, our favourite treat was joining in the Christmas carols and watching the Mayor turn on the lights on a giant Christmas tree in the  Mayor’s garden at the city hall around the 20th of December.

The best Christmas’  were celebrated at our village home, forty kilometers  west of Kampala. It was a big house surrounded by  rolling green hills, well maintained coffee trees and banana plantations that stretched as far as the eye could see. How we enjoyed roaming about in the wild! Our parents ensured that we learned to be useful about the house.

Decorating the Christmas tree was a ritual that was reserved for the girls. We started off  with choosing the right tree; large and tall, among the three or four overgrown ones from the hedge behind the house. This was followed by retrieving  the box of the old decorations from the store and adding them to the new ones.We would blow the balloons until our cheek muscles  hurt . The balloons would be  tied on the tree along with bells and ribbons. Many times , we would pause, step back to inspect our efforts and only when completely satisfied, would one of us  climb on a chair to place the golden star of David at the top.

Then early on the 24th, two or three cows picked from the herd will be slaughtered and the bulk of the meat would be neatly wrapped up in banana leaves and distributed in the village especially to the elderly. My father would insist that we delivered some of those parcels to the relatives in the village. The smiles and cries of immense gratitude have lived with me to this day. They taught me one of the true meanings of the Christmas season; sharing and giving with love whatever you have with the needy. This gesture always reminded me of how fortunate our family was.

On Christmas day ,we would wake up excited at the crack of dawn  and rush to the Christmas tree to check for the presents.  Always, there was a well wrapped up gift for each one of us and the helpers in the home. I remember the best present I was given was two books from the Heidi series. One of my brothers, a good swimmer, could not hide his joy when he was given a pair swimming trunks and a cap.  Many times we would wonder how our parents chose just the right present for each one. Perhaps it is true when they say that  Mother knows best.

We always attended the  8am service at the simple village church. The older ones would walk there except if it rained. Surprisingly, December was always a hot, dry month but then out of nowhere it could rain on Christmas day . The young ones would drive to the church with our father who  also loved coming to the village; away from the madding crowd of the city. It was a place of peace and quiet and it allowed him to spend  as much time as he wanted with us. He taught us to ride bicycles, how to harvest coffee and identify each head of cattle by its quirks. It was one place where he could be himself.

Christmas at this place was always busy. There would be more than thirty people in all, the family ,relatives , friends and a few invited ones from the village. The lunch itself was a real labour of love. A variety of mouthwatering dishes of  beef ,goat and chicken stews, roasts over open fires, accompanied by  bananas, rice, potatoes  and vegetables. Everything was cooked to perfection and thankfully we all ate to our heart’s content and we washed it down with Pepsi cola, the favourite drink at the time.

To amuse ourselves, we would play board games such as Ludo and Snakes and Ladders while the adults reminisced about seasons passed. Having worked in the colonial office earlier on, my father would always find time to listen to the annual Christmas message of Queen Elizabeth II to Britain and the Commonwealth.

It always surprised to us how such a day of fun would quickly pass. Such days were unforgettable. Since then I have celebrated more than fifty such days but I still treasure the memories of my childhood. Some of the rituals I carried with me when I got married . As I grow older, I have come to appreciate the true meaning of Christmas to a true believer that is the love of God  to mankind. God’s nature is love and on seeing that we had turned away from him, he sent  his only son to reconcile us to him. What greater love! It is not lost on me that as a Christian, I am God’s child  and it is my duty  to be like him, living a life controlled by love. Everything that I do should be done out of love, for love and in love.

This message should not be lost in the merry making and feasting  at Christmas time.

Merry Christmas to you all. May 2019 be a year filled with love, joy, peace, good health and prosperity.

Tales of the Thoughtless MIND

A daily selection of the best content published on WordPress, collected for you by humans who love to read.

The Art and Craft of Blogging

The latest news on WordPress.com and the WordPress community.